Our Approach to Discipline 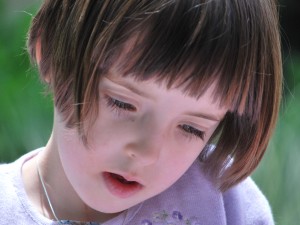 At the Montessori School of Wellington our goal is not to control children by means of rewards and punishments or by imposing adult authority on them. Our goal is to help them develop self-discipline, through self-regulation and self-control. Imposed discipline is only effective while the authority figure is present. We want the children to reach a point where it makes no difference if the teacher leaves the room because they are engaged in their chosen activities and truly want to make good choices. In order to make good choices, children must be given the freedom to act upon their choices and to experience the consequences of those choices – whether good or bad. This is what informs a child, not being told by an adult what to do and not do.

However, if it appears that a child may hurt him/herself or others then an adult will intervene and suggest that the children go to the Peace Table. At the Peace Table, the children sit on the floor across from each other at a low table. The child with the grievance puts his/her hand on the table and states his/her case. When s/he is finished, the other child has a chance to speak. Children do surprisingly well at the Peace Table. Justice to a child is very much black and white and isn’t muddied by our adult concerns with tact, diplomacy, etc. They might not leave the Peace Table every time having reached an agreement, but they will have had experience in conflict resolution. When they leave the table, the teachers will redirect them to a productive activity.

Discipline presupposes a certain degree of obedience. Before the age of three a child is truly unable to obey unless what is asked of her happens to correspond with one of her vital urges. At this stage, her personality hasn’t formed to the level where she is capable of making a choice to obey. It is this level which Montessori termed:

The goals of Montessori reach beyond this, however, to

Upon visiting a Montessori classroom for the first time, many parents are amazed at how calm and self-directed the children are. Montessori, when done well, is a beautiful blend and perfect balance of freedom and structure. The best Montessori teachers understand that maintaining this delicate balance is one of the most challenging and rewarding aspects of their job. It is on that foundation of freedom and structure that the child builds discipline.

Freedom is not a word that is traditionally associated with discipline. Parents are often concerned that the Montessori child’s freedom to choose activities presupposes that discipline is something alien to our classrooms. Does freedom mean license to act as he or she chooses or does freedom of choice carry with it certain responsibilities in the classroom community? A Montessori classroom is not where children do what they like but rather a place where they like what they do.

To have any meaningful discussion of these questions, we have to define the word ‘discipline.’ True discipline comes more from within than without and is the result of steadily developing inner growth. Just as the very young child must first learn to stand before she can walk, she must develop an inward order through work before she is able to choose and carry out her own acts. Surprisingly enough, Montessori found that it was through the very liberty inherent in her classrooms that the children were given the means to reveal their inner or self-discipline. Independence did not diminish respect for authority but rather deepened it. One of the things that aroused her greatest interest was that order and discipline seemed to be so closely united that they resulted in freedom.

But, many people assume that discipline is something that is imposed from without by an authority figure that should be obeyed without question. Discipline in the Montessori environment is not something that is done to the child; nor is it a technique for controlling behaviour. Our concern is with the development of inner control, which enables an individual to choose the right behaviour because it is right for him or herself and right for the community.

This inner discipline isn’t something that‘s automatically present within the child and it can’t be taught – it’s something which evolves under the right circumstances. The role of the teacher and the other adults in the environment is to be a model and a guide while supporting the child as he develops to the point where he is able to choose to accept and to follow the “rules” of the classroom community. This level of obedience is the point where true inner discipline has been reached. We instinctively recognize this level of discipline when children, or adults, are able to make appropriate behavioural choices even when authority figures are not present, because it’s called CHARACTER or INTEGRITY.

This is what we want for our children. With this level of obedience or self-discipline comes a degree of self-respect in which a child cannot help but respect the rights and needs of others alongside her own. She is then able to learn and grow freely in the security of a community of respectful individuals.

519 821 5876
Contact Us
5 Questions to Ask When Looking for a Montessori Schoolfeatured
Briefings on Montessori Talent & Leadershipfeatured, Montessori News in Guelph, Tips for Parents